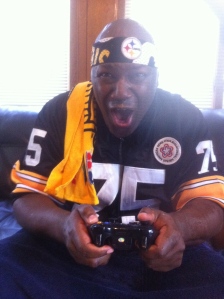 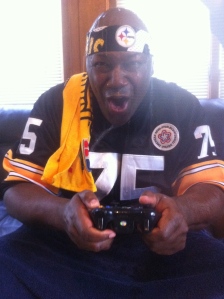 It’s that time of year

The football season is in full swing and fans are getting their hearts broken left and right.  That means it’s time to take out some frustrations on some poor unsuspecting guy or gal your playing in a game of Madden.  We at nightgames, have been building a membership of gamers who are looking to play a little Madden.  We couldn’t help noticing that whenever we venture into the online universe, we run into some person that seems to know all the tricks and all the cheats.  It’s like they’re just sitting  in a dark room in front of their tv with a diaper on and a mixing bowl full of snacks playing Madden.  So we decided to create a different gaming experience.  Sure we’ll do the tournament thing and you can win cash and prizes.  That’s  mad fun in itself, but we’re adding another layer.  I was sitting in my favorite wing joint watching football and having a few beers. I struck up a conversation with this guy sitting next to me.  He was a gamer and he played Madden and FIFA.  He said “I like playing online but nothing is better than being in the same room with the dude your whipping on.”  Then he looked at me as if throwing down some invisible gauntlet.  I thought to myself, no he didn’t just come to my door and smack me in the face, like the Madden commerical. I directed him to the nightgames blog and the web page. I told him as nightgames increases its membership, we’ll have good old-fashioned meet ups and play face to face but with a cool twist.  We’ll do it night games style.  You see, we have our own stuff like shirts and hoodies.  We’re not just a website we are a Community!!

2 thoughts on “MADDEN, Anyone?”

Leave a Reply to The Night Gamer Rising Cancel reply